It was already 9:23 am. One could argue that on a normal Saturday morning, that's an early start time.

But I was late. The conference room at the Hyatt Regency San Antonio on the Riverwalk was packed ... and buzzing with excitement over FHIR resources, interoperability and the like: 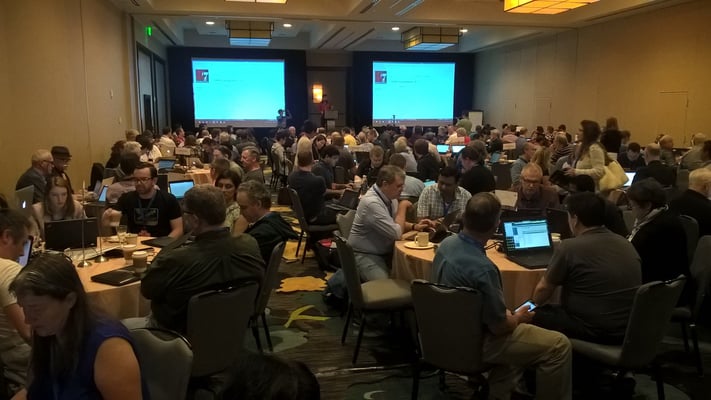 I later learned the total number of participants at the HL7 FHIR Connectathon 14 was 200+  (a sharp increase from the 6 who attended the first Connectathon just a few years ago).

It seemed like 20+ round tables, packed close to each other, each with 6 to 10 participants, elbow to elbow.  Some attendees engaged in lively discussion, some furiously wrote code, and some just stared at their screens (most displaying a FHIR resource page) brows creased in concentration.

Where Do I Start?

Why couldn’t I drag my behind out of bed a little earlier for the opening remarks so I could orient myself better?

Which table should I start from?

In this mild confusion, I walked past each table to see if I could find anyone I knew or a track I was familiar with.

What were these guys doing at a Connectathon? I had heard this wasn’t like a certification, but rather more about people testing their FHIR client or server applications against a series of test scripts.

How I Landed in the Medication Track

I saw Grahame Grieve (the "God of FHIR”) from the corner of my eye.  I’d met him for the first time the week before. He gave me brief nod and carried on imparting wisdom to a seemingly appreciative colleague.

There were many tracks – from the left corner of the room to the right - Provider Directory and Scheduling, Terminology, Medication, US Core, Attachments, Care Plan, Patients (not just for Beginners), CDS Hooks (must be popular as there were 3 tables),  Finance and Payers (2 tables),  and so on.

Thankfully Eric Haas, who I’d met a couple of times (he lives in Napa, I’m in San Francisco), waved me over to the Medication Track.  I dived right into a discussion about how to derive current medication list from the FHIR Medication resources and then ...

Fast forward 8 hours and my head was spinning from drinking from the “FHIR” hose (pardon the pun).  It was amazing to get all  the  first-hand feedback from so many smart people, on a host of issues we were dealing with at work in designing a federated FHIR service that pulls and consolidates patient data from multiple sources.

I plan to write more  about each of the tracks that I participated in, but here are a few of the quick take aways:

Overall, it was very inspiring to see so many smart people working on many interesting applications, with advanced standards knowledge and all skill levels participating. As a first timer, you can’t ask for a better learning opportunity.

Sandeep is a Technical Product Manager at UCSF (University of California at San Francisco) Center for Digital Health Innovation (CDHI). He is working on an interoperability project based on a federated model of FHIR services. Sandeep has held several CTO, Product Manager, and Software Architect roles since the late ‘90s. You can reach Sandeep at sandeep-dot-giri-at-ucsf-dot-edu or @sandeep_giri on Twitter.